Actor, director, creator and performer working in cinema, television and theater. I founded the company Cascai Teatre together with Susana Lloret. I trained at schools such as El Galliner in Girona, El Timbal in Barcelona, ​​Institut del Teatre and also with specialization courses in Italy (Comedia dellArte and Comicitat with Antonio Fava and Carlo Bosso), France (Pierre Pilat, Avner, and Michael Laeceq) and England (Philipe Gaullier). 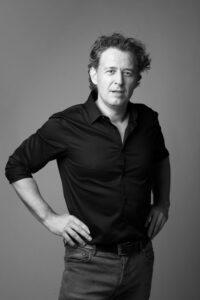 With Cascai Teatre I have created theatrical projects, 14 of which I have created myself, focusing on research and the contemporaryization of the different disciplines of humor with the aim of creating a current and own language on stage. These shows are: Novecento the Ocean Pianist (monologue), Cascai, The Incomplete Man, Le Paradis, Living Costa Brava, Peter and the Captain, Made in China, Zirocco, Hotot, El Pillo, La Banda del Teflón, Sections, Seafarers, The Comedian, Novecento the Ocean Pianist (with a jazz quartet), Shakespeare and The Colors of Duke Ellington.

My shows are always hybrids as they incorporate different stage disciplines at the service of humor, such as music, object theater, audiovisual, mime, clown, dance and audience participation. I fused different registers on stage to create my own language, with a clear influence of Jacques Lecoq’s French school and Philipe Gaulier’s English school. Starting from more technical aspects of disciplines such as the clown and the jester, this clumsy character capable of creating comic situations of small daily accidents causing great tragedies.

I have received several national and international awards such as the UNIM BBVAA AWARD for Best Show, Best Actor, also the Award for Best Show of the Santa Eugenia de Mallorca Show, the Coup de Foudre de les Estivales de Perpignan Award among others.

As a pedagogue I have been a teacher at the El Galliner theater school in Girona for 19 years and at ERAM at the University of Girona for 6 years. I have also offered specialized courses as monographs internationally: France (Perpignan, within the programming of the Festival Les Estivales), Theater del Etang Saint Esteve, Finland Festival Imatra, Belgium Festival Humorologie, Italy to Castelnuovo del Garda and Ancona, Tunisia and Cuba.

For 5 years I have been carrying out a collaboration program with different social entities, to use my experience in the pedagogical field of theater as a tool for the development and integration of groups at risk of social exclusion. So, I’m currently working on a project at the Baix Empordà Mental Health Center (Platja d’Aro), specifically in two groups related to addictions and toxicology. And through the Gironès County Council, I work in the youth centers of Cassà de la Selva, Salt and Llagostera.